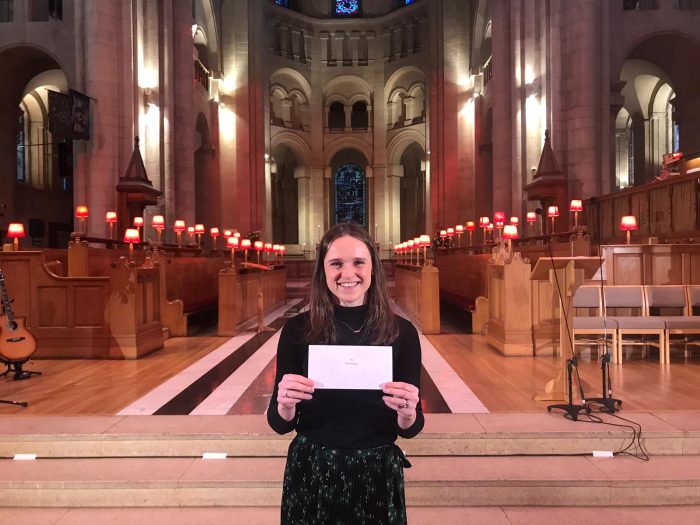 An impressive £170,000 was raised on the steps of Belfast Cathedral in the lead up to Christmas during the Annual Black Santa Christmas Sit-Out.

After attending The Good Samaritan Service last week at St Anne’s Cathedral, we are extremely grateful to have received £1530 from this fantastic appeal and look forward to seeing this contribution in action, helping more young people in Northern Ireland through Surf Therapy. The ceremony saw representatives from 198 charities from across Northern Ireland.

Belfast Cathedral has said ‘The donations distributed were over £170,000 in total and were presented by actor and comedian Tim McGarry of The Blame Game and Give My Head Peace. This was the 43rd year of the Black Santa Appeal, which helps support a range of charities across Northern Ireland. The Dean of Belfast, Rev Stephen Forde, paid tribute to all those who had donated so generously. This year’s giving focused particularly on charities involved in the areas of homelessness, mental health and the refugee community. Tim McGarry, who handed out the cheques, said that Black Santa Sit-Out made him proud to come from Belfast, describing himself as a long and true supporter of Black Santa Appeal. The Cathedral Sexton, Jonny Brooks, currently appearing as a contestant on ITV’s The Voice UK, sang a version of Van Morrison’s – Sweet Thing, during the service.

This years success of the Black Santa Appeal and Good Samaritan Service was a true display of generosity from the people of Belfast. ‘

A huge Thank You to our wonderful volunteer Surf Mentor ‘Bex’ for collecting the cheque on behalf of Wave Project NI.