In the late summer of 2010, I found myself standing on the warm sand of Watergate Bay beach in Cornwall chatting to a middle-aged couple with tears in my eyes. It was one of the most special moments of my life – when I realised that something as simple as a surfing lesson could perform miracles.

The two people I was speaking to were called Mr and Mrs Johnston. They were the parents of Sam, one of the children on The Wave Project’s pilot surf therapy course in Watergate Bay in Cornwall. It was a warm Wednesday evening in September, 2010, and they had turned up to watch Sam surf on his last session of our course.

When the session finished I had spotted them standing around on the beach, clearly waiting to talk to me. I went over, and Sam’s father said something that I will never forget. Something that changed my life. Speaking in a quiet, serious voice, he  said, “We wanted to come and say thank you. You’ve given us back our son.”

Sam (not his real name) had been referred to our first ever surf therapy course by the local NHS child and adolescent mental health team. Like so many young people who have attended The Wave Project since, he was experiencing anxiety and depression. But in Sam’s case, it had caused a particularly upsetting side-effect known as Selective Mutism; a condition that meant he never spoke, even though he could.

For his family, this was particularly distressing. They worried that Sam was losing his teenage years, and had no idea how to make things better for him. For myself, I knew absolutely nothing about the condition – in fact I had never heard of it before. But that didn’t matter because the surf therapy course wasn’t aiming to cure this condition – all we offered Sam was an opportunity to try surfing in the hope that he might feel a bit better. 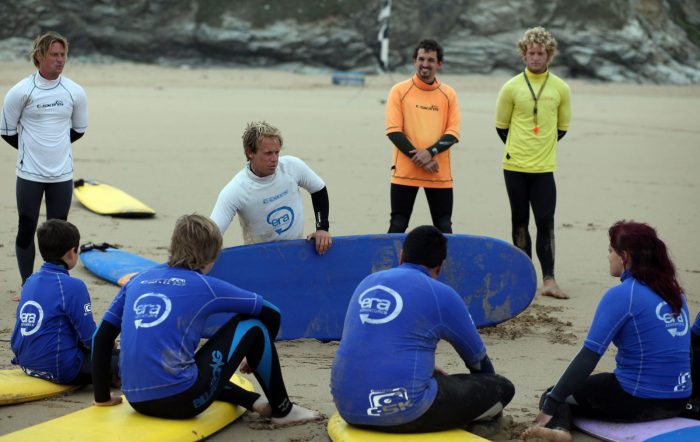 Six weeks later, Sam had learned to surf. Each week he had worked one to one with his ‘surf mentor’, catching waves and trying to pop up. The weather was kind to us on that pilot scheme – each week we were surfing in perfect 2-3 ft clean waves under the gaze of stunning Cornish sunsets. Over time, Sam relaxed. He laughed when he fell off his board. He gestured wildly when he caught his first wave standing up. Then, at some unknown moment that suited him, he started chatting to his mentor, as though he had never been silent.

I didn’t see it happen, and wouldn’t have realised the significance of it if I had. Neither did his mentor. But perhaps, looking back, that was what Sam needed – to not be rushed, to be allowed to do things at his own pace.

Surf therapy changed his life. But he also changed mine. So did his parents. If they hadn’t come to the beach that day and explained the significance of what had happened, I would never have understood that surfing, when delivered in a supportive way, really can change lives.  So thank you Sam. Thank you Mr and Mrs Johnson. You have helped to inspire the start of The Wave Project.