The Cornwall-based charity received the Sport for Social Change award a star-studded ceremony at the British Sports Awards at London Pavilion on 6 December.

It is the first time that this category has been included in the Awards in its 69-year history.

“We are so delighted to have won this prestigious award, a fantastic honour capping off a truly brilliant year for The Wave Project team.

“It’s a great tribute to the hard work and dedication of our small team of staff and hundreds of volunteers throughout the UK, who help young people improve their wellbeing and mental health through surf therapy.”

The British Sports Awards aims to highlight the best individuals and organisations across the UK. 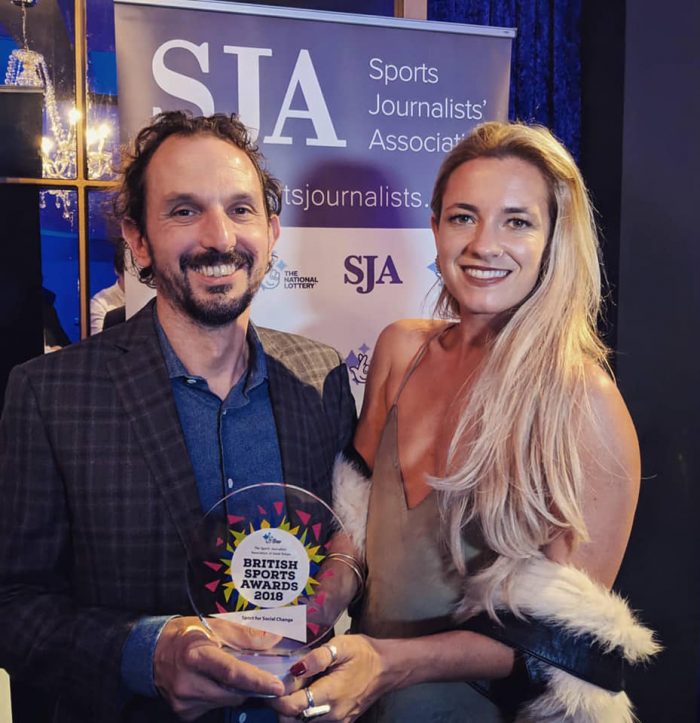 The newly crowned Paralympic World Champion British Basketball team showed us once more, the positive benefits of sport are inclusive, and anything is possible.

Wave Project founder and CEO was joined on the night by the charity’s ambassador, surfer Sophie Everard.

The awards have previously recognised sportswoman Victoria Pendleton who is now patron to The Wave Project charity.

This year, The Wave Project supported over 1,000 children at 11 sites around the UK.

Starting in 2010 with a single project funded by the NHS, The Wave Project now supports more than 1000 young people every year across 13 sites.  These young people are referred by professional services and present with a range of issues from anxiety through to depression and other symptoms of trauma.